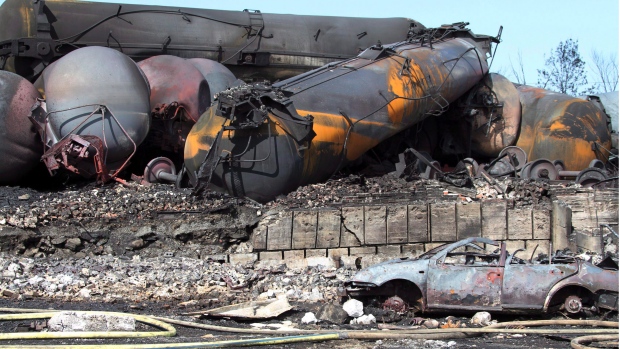 Conservatives know well that rules without enforcement will be broken and as much as this applies to criminals in their tough on crime agenda, it also applies to companies that will use self-regulation strategies as a means to cut costs and potentially – and in this case – endanger public safety. What is unbelievable is how Conservatives are ready to impose enforcement on individuals through their tough on crime agenda yet when rules are set in the corporate realm for the same purpose – public safety – companies are merely expected to follow the rules without as much as an oversight or enforcement of them.

“Following this tragedy, our government took decisive action to ensure the safety and integrity of Canada’s rail system. We are in the process of implementing each and every recommendation that [TSB] has made.”

To add insult to injury, Transportation Minister Lisa Raitt, facing tough questions about the incident, admitted during her press conference on the report that she hadn’t read it and by 5pm Tuesday Parliamentary Secretary of Transportation Jeff Watson didn’t read the 200-page report Canadians have waited over a year to be published – prompting tough questions from CBC’s Power and Politics Host Evan Solomon. Raitt insisted blame should be shifted to the company and ineffective train inspectors rather than the government.

“Who was the guardian of public safety? That is the role of the government…and yet this booming industry where trains were shipping more and more oil across Canada and across the border ran largely unchecked.”

What makes the report damning is the main factors include lack of oversight and lack of safety measures, both of which could have been dealt with such that a small Quebec town didn’t need to endure a deadly and costly explosion.

“Take any one of them out of the equation, and this accident might have not happened.”

Proper enforcement of transport safety rules could have prevented at least one of the 18 conditions and with a government that fails to take responsibility – let alone read the report the day it is released – lacks the critical judgement to keep Canadians safe. Despite the deaths of 47 people, the town left in a state of trauma and the millions taxpayers shelled out to fix the mess, the transportation minister can’t be bothered to read the report and take responsibility where it is due? Would think a Conservative minister that cares primarily about public safety would at least have read the 200 page report.

The government isn’t sole to blame in the situation, but some of the other reasons could have been mitigated by a more responsible government. One of the factors was Transport Canada’s lack of follow up on companies transporting dangerous goods. Another is Transport Canada’s failure to evaluate the quality of companies’ safety systems rather than just verify their existence. Another, damning enough, is Transport Canada’s choice to ignore complaints about the breaking system used by the train that derailed that night. Is it so difficult to mandate dangerous DOT-111 tanker cars off the tracks?

The report also lays blame to MMA’s lax security culture – one that could have been changed with actual enforcement of safety regulations. The government allowed MMA to operate with minimal interference for more than a decade despite knoing there was “an elevated level of risk” caused by reoccurring issues over train security and track maintenance.

“This was a company with a weak safety culture, a company where people did what was needed to get the job done rather than always following the rules. A company where unsafe practices were allowed to continue.”

The only safety audit made by the Quebec office of Transport Canada was conducted in 2010 and supervisors in Ottawa chose not to intervene since they were in the dark about any oversight weaknesses in its Quebec rail inspectors.

The negligence by MMA and Transport Canada won’t reverse last year’s disaster that has impacted over 6,000 people, but Lac-Mégantic Mayor Colette Roy-Laroche hopes the report will lead to a greater level of rail safety.

“It’s what I wish for the families, but also for all the residents who have seen their lives transformed and lost their bearings since the tragedy.”

“We believe that the [government’s response] is not enough yet. We are calling for adequate regulations on the transportation of dangerous goods, including better supervision and monitoring, and a thorough review of safety measures so all residents of Lac-Mégantic and the region – and all Quebecers and Canadians – can feel safe.”

To ensure this would mean a change in culture at Transport Canada. According to Brian Stevens, who represents 9,000 workers in the railway sector in the Unifor union, bureaucrats currently shuffling papers and desks would need to be shifted into the field – arguably something that should have been done a long time ago.

“That’s what we do with our highways. We have inspectors who run around pulling over trucks and having blitzes. Most of the truck drivers are safe, most of the operators are safe, but there’s some out there that aren’t,” he said.

Charges have been laid against MMA, which filed for bankruptcy shortly after the disaster.

“The TSB report indicates that insufficient hand brakes were applied to the train and that the hand brakes were not tested appropriately. As you know, criminal charges have been laid by the Sûreté du Québec, and this is now before the courts,” Raitt said.

But as we speak, the number of trains transporting crude oil on poorly maintained tracks with potentially sub-par safety mechanisms is increasing. Since Lac-Mégantic, there have been 10 other derailments, luckily not causing the same disaster.

“You see how frequently crude oil is transported every day, and you know action is needed immediately.

Every player in this whole operation was negligent.”

The report has prompted criticisms from the Official Opposition, calling on the government to reverse its hands-off approach on rail safety.

NDP Transport Critic Hoang Mai said, “This report is really clear, and reminds us of the consequences of a hands-off approach to safety.”

“Conservatives have left companies to monitor themselves. It is an approach that ended in tragedy,” he said. “It’s time for the government to implement more rigorous oversight to prevent accidents like Lac-Mégantic from happening again.

The Conservatives’ hands-off approach to safety regulations to cut costs and increase the flow of crude oil for trade and the failure to take leadership and reallocate resources within Transportation to ensure existing regulations had teeth – rather then be treated like guidelines – contributed to the disaster which involved a train unfit for its journey on poorly maintained tracks which happened to be carrying 7.7 million gallons of crude oil in DOT-111 tankers, prone to weakness in collision scenarios. If the Conservatives can ensure crimes don’t happen with sharper laws on individuals, why couldn’t they have ensure public safety by adding teeth to safety regulations? As for cutting red tape, Conservatives will argue, what about the bureaucratic red tape?

On March 25, the Commons Board of Internal Economy decided to give MPs a pay increase and larger travel allowance. MPs will be getting a 1.6% raise while also receiving 6.7% more money for their travel allowances. The changes were only made public Thursday when it was tabled in the House of Commons. In a time of economic uncertainty and a focus on reducing deficits, increasing MP salaries and travel allowances proves to be reckless and irresponsible.