Newly appointed Conservative Senators are finding their perks rather appealing – so appealing that they are cheating taxpayers to cash in. First Patrick Brazeau abused the system, and now Mike Duffy. We can all agree they should repay their takings and we all agree their expenses will never outweigh their salaries. We can, then, agree the housing allowance perk should be scrapped and the savings be refunded.

There is nothing more infuriating than paying the highest taxes in North America than knowing the money is being wasted. No matter the justification, entitlements to elected officials should be limited, should be bare and should not be on the table of discussion.  While millions of families country-wide struggle to make ends meet, Conservative Senators abuse safety-net programs that are in place that should never have existed in the first place.

Being an MP or appointed Senator may be an honor, but like with many jobs in Canada, a salary is not a bonus, it is what you have to live by. Serving the electorate is as much a job, by definition, as mopping a floor. With a Conservative government preaching the narrative that people on the east coast should move to Alberta to get jobs, before asking for Employment Insurance, the same should be applied to all government officials and the allowance, which pays government officials up to $21,000 per year for secondary housing if their primary residence is at least 100 km away from Ottawa, should be abolished.

This country should have a real conversation about austerity because the Conservatives are doing it all wrong. What the Conservatives have done is cut EI to a point where Canadians are left as undignified workers if they get laid off, raise the retirement age to 67 to make all future Canadians slaves to their work and its tax burden, cut food and public safety and started spending on a stimulus plan which arguably was nothing but ads and signs!

If the Conservatives want to have a discussion on austerity and serve it to the public, they should do one thing first: take cuts on themselves. Rather than putting on the crown of entitlement and turning the corner when they take advantage of the public purse, the government should prove that it is prudently spending taxpayers’ money and prove that it is worthy of the money it receives. The $16 orange juice, the personal flights out of this country, the need for limos to drive MPs the distance of a 5 minute walk, the perks and fancy entitlements, the overblown pensions… The preceding is the first thing on the chopping block. The housing allowance: abolished. The unnecessary bureaucrats and public servants: laid off, and administrative costs cut first. The over-sized PMO and PCO: slimmed to pre-Harper rates. The largest cabinet in history: delete entire departments and merge them with other departments – we were fine with smaller cabinets in the past!

Clearly the Conservatives are fans of the dictatorial feudal style economic management where the main focus of their agenda is:

The Conservative message is: Let us eat hardy with $16 orange juice as food safety is cut to a point that meat, tainted with listeria and ecoli get served to the population leading to serious illness and death. The Conservative message is very simple: wait two more years for retirement so they can keep a good chunk of the 23:1 retirement plan that they are all going to enjoy – something that the richest companies don’t even have!

It is time for Canadians to wake up and realize that many of the cuts the Conservatives have made – to support spending on themselves, fighter jets that don’t have working engines, prisons that weren’t necessary as crime rates are at all time lows – don’t need to be tolerated and that they should, instead, demand that the Conservatives resort to their small government philosophy where the benign dictatorship gets trimmed to size. Some may argue that the cuts aren’t worth making because they wouldn’t have the same effect on the economy but then one must ask what is principled about a system where government officials treat themselves to a taxpayer-funded safety net and perks while taxpayers take the hit down on earth.

Even if the resultant cuts of government only come to a few hundred million, at least one can say that these officials are not spoiled and care only about their standard of living and not the reason why they were put there: to serve the Canadian people. Even if the senator’s housing allowance declarations totaled $2 million since 2010, it is still more than what any average family will make in the same period. Where in the new EI reforms does it state that Canadian families forced to relocate to find work will be given an allowance to have a second home? – or get full moving and living expenses paid?

So while Duffy asks for living expenses from back in the 1970s – even though only recently being appointed senator by Prime Minister Harper, and while Brazeau may claim that he needs the money to live with his father in an apartment while living with his girlfriend in a nice house across the river from the Hill, what have we Canadians to say about this? We can either grunt and say: politics as usual, politicians are crooks, or whatever else you want to say, or we can stand up, have a voice and denounce this injustice – not only by forcing these senators to pay us back for their theft, but also to demand that this perk be abolished as no Canadian will ever have the privilege to have someone else foot their bill the way these government officials have. Let’s get back to reality, taxpayers fund the government and they have a right to get the bang for their buck and anyone that isn’t willing to offer that should step aside and let someone else do the job.

So in short, Patrick Brazeau and Mike Duffy should repay their false claims on housing allowance as neither of them actually need it. In short, this program should be abolished and Conservative employment discipline should be applied to government officials. If you want the job, you have to move there, that is that, no arguments, no buts, no whining. In short, if the Conservatives want to have any credibility on the economy, they need to end their entitled and feudal way of thinking and start taking serious cuts on themselves to show Canadians that the cuts that we as a populace will endure are respectable and not just a ploy to put more money into their coffers. We pay high taxes in Canada and the trend is consistent: we don’t get the value for our dollar – arguably: not even close.

Is this the way you want your country to be run? 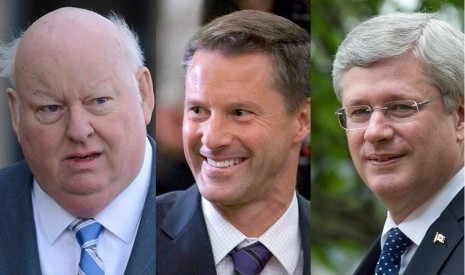